Sexual and Racial Dissidences, Social Practices in Art and Cyberfeminisms

From the Feminist Upheaval to Public Art and the Cyberspace: The Far West of Opportunities

From the Feminist Upheaval to Public Art and the Cyberspace: The Far West of Opportunities’ is a research initiated in 2013 with the support of Intermediae Contemporary Art Center Matadero, Madrid (Spain), around the work of the first female artists considered forerunners in the 70s and how the evolution towards digital media and internet from cyber-feminists occurred after the 90s in the public art context. It is based on various case studies of artists linked to Toxic Lesbian’s* proposal.

The context in which this study is part of is related to social, scientific, politic or intellectual principles, which are the base of the revolution around a new concept of gender that appeared at the end of the 20th century. The feminist upheaval; the homosexual activism; the evolution of scientific research around genitals and its, until then, rigid limits; the intersexual activism; the assumptions of human rights organizations of the Yakarta Principles about gender identity; the women’s empowerment and also the analysis of their identity from their female masculinity. These are some of the factors along with the arrival of some intellectual authors who from the transfeminine approach and gender identity on female masculinity transforms and brings together a discourse that comes to life in these movements.

‘From the Feminist Upheaval to Public Art and the Cyberspace: The Far West of Opportunities’ is focused on the cases of Suzanne Lacy, Shu Lea Cheang and Toxic Lesbian linked in its content with the artist’s Faith Wilding and the Venus Matrix. The objective is to analyse the existing relations between the artistic praxis that involved their transforming contributions to the feminist discourses, cyberfeminist, transfeminist and queer. Their contributions will be based on the definition of a new genre of public art, the development of creative and collaborative processual methodologies, new definitions of work and authorship which are introduced by the Internet and social networks or the use of technologies in relation to other concepts of gender.

The research focuses on the life stories of the artists and the selection of some of their work for the analysis from this perspective. The cases are linked to cultural institutions, exploring the transformation they might have experienced from these practices.

Toxic Lesbian Open Dialogues with Suzanne Lacy, 6th of May, 2014 at Intermediae Matadero Madrid. In collaboration with with Gloria G. Durán and the Madrid Fine Arts University. 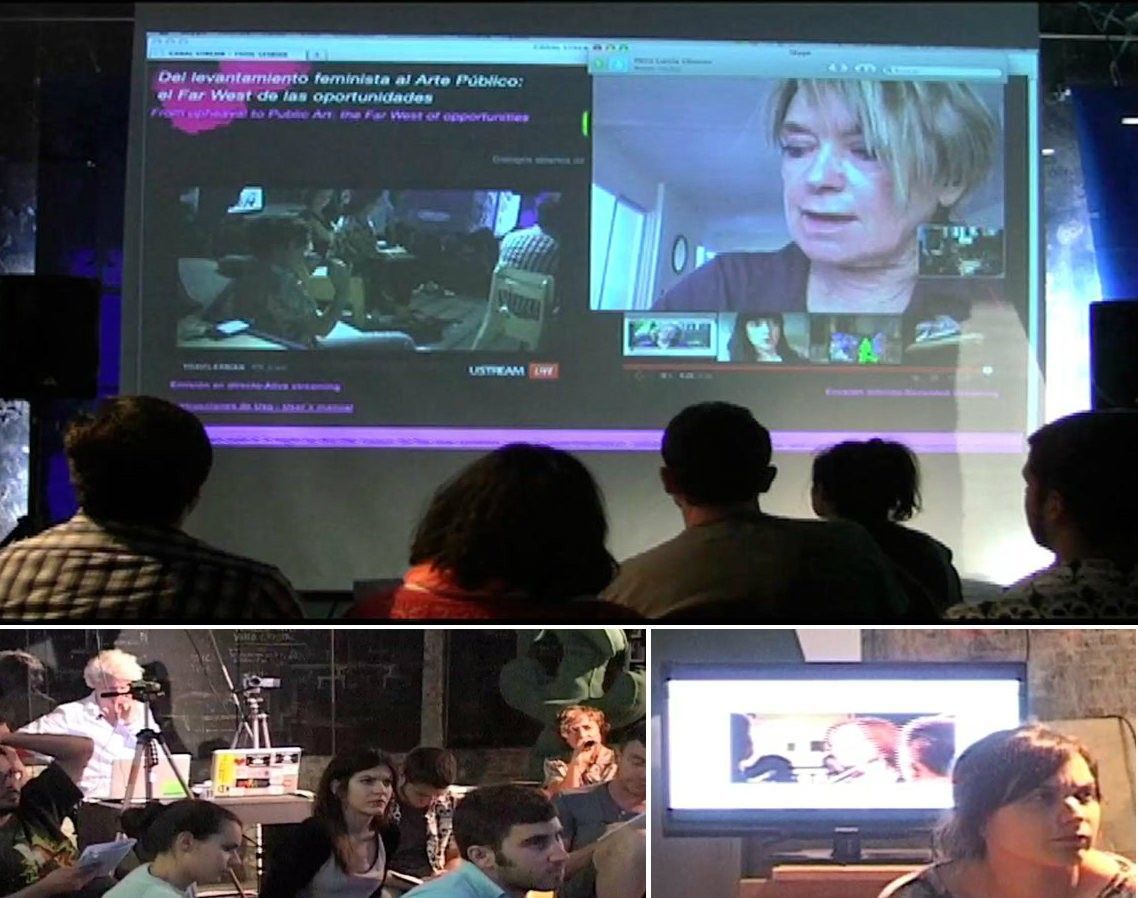 Every political and social crisis force reappraisals of conditions of production, reevaluation of the nature of artistic work, and reconfiguration of the position of the artist in relation to economic, social and political institutions.
Suzanne Lacy was a product of these political upheavals: “In this moment in California we had the great workers strike, we had the anti war movement, he had black power, the free speech riots at Berkeley, the Black Panthers…”.
With all the reevaluation of the nature of artistic work, all the ideas that support it were put into question: the author, the work of art as object and the nature of the audience. The main idea was looking for an art that would be able to have a deep meaning in common people’s life, and of course, to obtain such utopia result one should investigate and experiment with new models, with expanded audiences, with dialogues, with collaboration and cooperation.
In a way all this conceptualization has to do with feminism, since feminism is an open front against fix structures of gender and social classes. Feminism has to do with equality and with bettering everybody’s common life. Feminism has always been concerned with equality in society for every body, as New Genre Public Art is also concerned.
The place and context for all this dramatic changes in the art scene was California. It was a virgin territory, the “Far West of Opportunities”, as Lacy puts it. It might be this the reason for the new common spirit of experimentation, collaboration, working together and starting processes that wanted to empowered people all around the world.
Women artists from ‘90s have developed new strategies to create and diffuse their artwork. Feminism and sexual orientation are two issues considered on their proposals. Ciberfeminism as social movement influences those artists to design their pieces in such a way the Internet is the main source of their inspiration.
Venus Matrix (VNS Matrix) is an Australian women artists group known from the beginning of ‘90s. They were one of the first using art pieces just created for the Internet and to be diffused by viral strategies. Many other artists have continued their way since then. VNS Matrix is an influence for Toxic Lesbian art work.
Donna Haraway is a well-known writer changing the traditional feminist considerations from a queer point of view, introducing the Cyborg concept. Gender defined, as a Cyborg metaphor will do a revolution in any trans-feminist women artist imagination.
Many women have continued the emancipatory way that twenty or even thirty years before, other women activists or women artist activists had started. Suzanne Lacy´s ideas about art and audiences, her definition of New Genre Public Art is part of the same theoretical and activist line. The XXI Century tools take into consideration the virtual representation space and that leads to a deep change, but this new way started many

English transcription of the dialogue with Suzanne Lacy in Matadero the 6th of May, 2014

From upheaval to Public Art: the Far West of Opportunities (01)

From upheaval to Public Art: the Far West of Opportunities (02)

From upheaval to Public Art: the Far West of Opportunities (03)

The study continued with the debate emerged in November 2014 in the Reina Sofía Museum with the support of Intermediae and the participation of:

(Videos only in Spanish)

From the feminist upheaval to public art: the Far West of opportunities debate (I)

From the feminist upheaval to public art: the Far West of opportunities debate (II)

From the feminist upheaval to public art: the Far West of opportunities debate (III)

From the feminist upheaval to public art: the Far West of opportunities debate (IV)

From the feminist upheaval to public art: the Far West of opportunities debate (V)

From the feminist upheaval to publici art: the Far West of opportunities debate (VI)

From the feminist upheaval to public art: the Far West of opportunities debate (VII)

(Videos only in Spanish):

Cyberfeminist artist Shu Lea Cheang was the third study case in the research after Suzanne Lacy’s and Faith Wilding’s. Toxic Lesbian has collaborated with the artist in several occasions after meeting in Intermediae in 2009. In March 2015, Elena Tóxica made the interview transcribed below.

In 2009, part of the process work “UKI” by Cheang took place in the art production center of Hangar, Barcelona.

With the goal of studying the involvement of the center hosting the work, we did two written interviews-with the current director, Tere Badía, and with the director at the time of the production in 2009, Pedro Soler.

Conversation with Hangar about the development of UKI in Barcelona

Between 2010 and 2011, Cheang participates in two projects with Medialab work groups. In them, she develops other parts of her work “UKI”. As we did with Hangar, we interviewed Marcos García, current director, in order to assess the role of the institution in the work and its topic.

As part of the Cheang research, in February 2016, the author and researcher Remedios Zafra does the reading and interpretation of the work “Brandon“ (1998) in Intermediae, Matadero, Madrid (Spain) with the participation of the artist and students from the Master on Research and Creation, offered by the Faculty of Fine Arts of the Universidad Complutense of Madrid and the The Master’s Degree in Arts Practice and Visual Culture from Reina Sofia’s Museum. 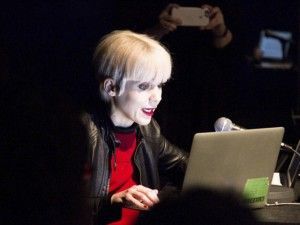 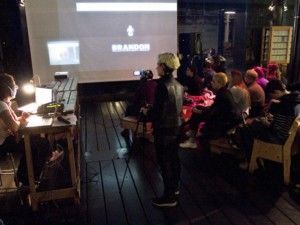 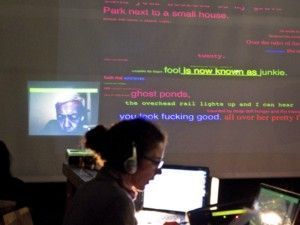 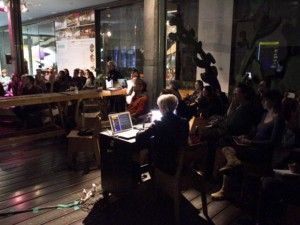 During the navigation at Matadero, Madrid

Toxic Lesbian developpes its own artistic project from the beggining in relation with 70s art proposals from feminist and conceptual art. These connect creation with new genre of public art. American artist Suzanne Lacy, is a reference as the editor of “Mapping the terrain”, a key on this issue. She collaborated on it with artists as Allan Kaprow or Judy Baca and the art critic Lucy Lippard, mainstreaming the debate about a new genre of public art.

Toxic Lesbian collaborated with Suzanne Lacy in 2010 at the Reina Sofia Contemporary Art Center and National Museum (Madrid, Spain) with its project “Trash and Tension”. A communication was opened with the artist and new interviews and reviews took place by Toxic Lesbian in 2012.

Interview with Suzanne Lacy by Toxic Lesbian and Gloria G. Durán about New Genre of Public Art and gender identity. May 2012.

Interview transcription of the interview with Suzanne Lacy by Toxic Lesbian and Gloria G. Durán about New Genre of Public Art and gender identity. May 2012.

Dialogue between Elena Tóxica and Gloria G. Durán about “Mapping the terrain”. June 2012.

From these dialogues, Elena Tóxica and Gloria G. Durán analized with Lucas Platero, writter and activist on LGBTQI issues, the Lacy’s proposals from a gender and identity point of view. June, 2012.

Project process was developped in Huelva, at the artists residence selected for Sierra Centro de Arte in july, 2012. An Open Dialogue with the public and Elena Tóxica and Gloria G. Durán “Suzanne Lacy and Lucy Lippard Revisited” and different land art actions took place. July, 2012. Pieces produced during this residence were:

Action over the natural landscape about Female Masculinity

Opened Dialogues about Gender Identity, Public Art and Action over the Natural Landscape